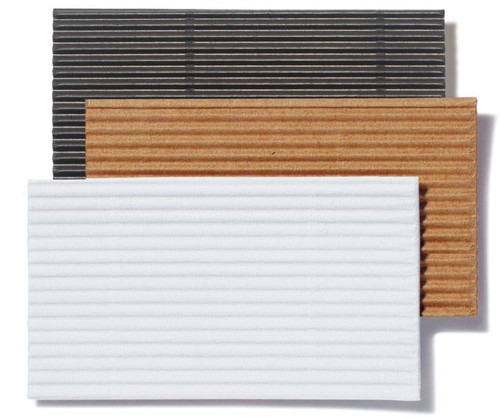 The trend in the world of corrugated boards is towards ever smaller flutes. No sooner had the manufacturers come up with the micro-flute (E-flute), which was not yet even standardized (that was in the 70's), when they added an even finer flute (in the 90's): the F-flute is also not standardized and even finer. Despite its thinness of 1 mm, this fine corrugation has a surprising stiffness. Of course, technological progress has not exhausted itself so that now there are at least two even finer corrugated boards, the G-flute and the N-flute. Unfortunately, we do not yet have either of those on offer.

Single face corrugated board can be used for any number of purposes: it is a well-known packaging material, is sometimes used as a wallpaper, it can be folded in order to make folders or, of course, used in all sorts of handicrafts. This aesthetically attractive board is also used as a material for architectural model making or as a photographic background.

Much like paper, the single face corrugated board can be cut with a blade or a scissors as well as glued with TESA ALL-PURPOSE GLUE and most other adhesives and takes to being stapled as well.